Senator Ita Enang, has disclosed the reason behind the ruling All Progressives Congress move to convince Senate Minority Leader, Godswill Akpabio to decamp from APC to Peoples Democratic Party, (PDP). 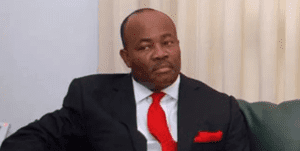 Enang who is President Muhammadu Buhari’s Special Assistant on National Assembly Matters revealed that Akpabio was approached about defection due to his “nationalist posture”.

He disclosed this while addressing journalists in Calabar, Cross River State, on Sunday, adding that Akpabio will be a great asset to the APC.

Stating: “Akpabio was what we could call the certificate of registration of the PDP. We discovered that he had a nationalist posture, considering his pedigree, we had no option other than to approach him.

“The APC worked so hard to bring him to its fold. What we observed was that Akpabio already had a lot of democratic/nationalist credentials in him and was one Nigerian willing to work for the survival of the country and not for his parochial interest.

“We had to bring him to our party and so light met light. I charge other political parties to cry less.”