Umahi, said this at the Government House, Abakaliki while dispelling rumours that he was making plans to join APC.

The governor said he cannot join the kind of APC with failed leaders in Ebonyi State, stressing he had benefited immensely from the PDP as chairman, deputy governor, and ultimately state governor. 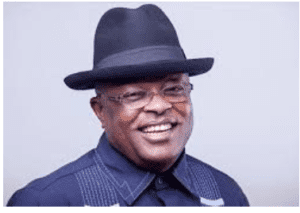 Umahi maintained that his focus was on how to attract democratic dividends to the people of the state and not dirty politics.

“Mr. President or any APC person has never asked me to come to APC, and they will never ask me, and there is no reason for me to leave my party PDP of which I am the party chairman, deputy governor and now governor.

“I have always insisted in character.

“People that jump from one party to the other should examine their characters, except if there is any problem within your party.

“As for today ,till tomorrow until Christ comes, there is no crisis in PDP. Even if there is a need for me to leave PDP, I can never leave PDP to the kind of APC in Ebonyi State.

“Because with the kind of leaders in Ebonyi APC, leaders that have failed Ebonyi State. I can never be on the same political platform with them.

“I am focused to do my job. I am focused in governance. I have always insisted that we should leave party politics to our party men and women, while as soon as you are elected, you should focus on your job.

“The fever that has been griping me since the day I was elected was for me to do my job, the dividends of democracy and the plight of our people.

“So they should leave me alone with this their dirty politics.  I am focused; I am PDP. As a member of PDP, I have benefited on the platform to be a party chairman, to be a deputy governor, and now a governor. I am a man of character”, he maintained.