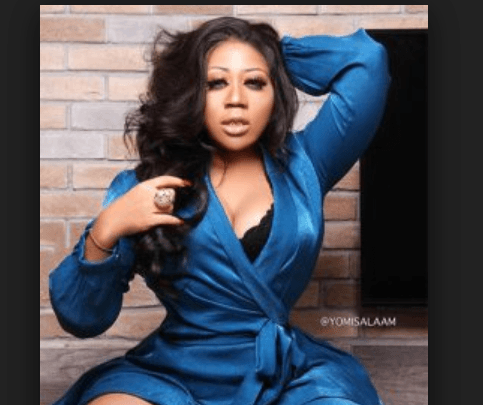 Moyo Lawal’s Biography: When you’re a nobody, struggling to make ends meet, nobody wants to know about you. But once you become popular, everyone starts digging into your background to know your story. Moyo Lawal is a sassy, beautiful and popular Nollywood actress. But she has a controversial personality. Maybe if we look into her background, we can understand her better.

Moyo Lawal was born in Badagry (Lagos State, Nigeria). She attended Tomobid Primary School and Lagos State Model College where she obtained her primary and secondary school education respectively. She has a bachelors degree in Theatre Arts. She chose this field because of her passion for acting. 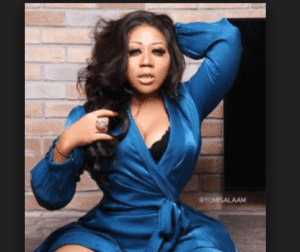 Before developing her successful movie career and becoming popular all over Nigeria, she kept receiving small roles in low-budget productions. Her first acting fee was 5,000 naira per one episode. That was before her friend advised her to audition for a movie. Since then, Moyo started attending multiple movie auditions, and some of them proved to pay off.

Her television debut was in the series called “Shallow Waters”. This series brought her to the limelight. Since then, Moyo Lawal has been featured in a lot of breakthrough Nollywood movies like “Big Gals on Campus”, “Cloud of Pain”, “Mistresses”, “Never Love a Prince”, “Thanks For Coming”, “Judas Game”, and many other prominent ones. She also acted alongside many famous actors like Iyabo Ojo, Biodun Okewo, Njoku, Halima Abubakar, Mary Remmy, and multiple others.

One of her significant works is “Tinsel”, the soap opera where she played a role of Chinny. Apart from that, she appeared in the comedy series, Jenifa’s Diary. Looks like whichever movie this woman is acting in, it is always a high-budget project with lots of first-class celebrities in it. No one knows Moyo Lawal age for sure as she never revealed it publicly, but it is known that she celebrates her birthday on New Year’s Day, January 1st.

ALSO READ:   How Well Do You Know Monalisa Chinda | Biography

Moyo Lawal faces a lot of criticism because of the way she exposes sensitive parts of her body. She is curvy, with flesh in the right places. She displays sensual pictures that can make your hairs stand. People rumored that she must have undergone plastic surgery, that her looks are not natural.

However, Moyo never admitted undergoing plastic surgery and this rumor obviously lacks official proofs. Besides, many fans love and admire her for being so confident and always ready to stand up for herself. She inspires a lot of people, especially those who have a hard time believing in themselves. Moyo herself says that every good girl has a naughty side, and there is nothing wrong with it. She is never ashamed of posting revealing pictures of herself online.

Moyo’s personal life has not been easy all the way – she lost her mother in 2013, who was buried in Ikoyi according to Muslim rituals. After her mother’s passing, Moyo Lawal proceeded to honor her memory by donating money to charity and giving food to the poor people in the streets.

In the recent interview, Moyo Lawal confessed that she dreams of finding her perfect person to start a family with and have kids. She said that she wants to do it to make her father happy since he always wanted grandchildren. But she also revealed that she is under pressure because so many people are encouraging her to find a suitable partner, and she is convinced that everything at the right time. She believes that both sides have to try and maintain the happy marriage. Still, she would love to find her ideal partner as soon as possible and is hoping to pursue a union like Kanye West and Kim Kardashian.

ALSO READ:   Get To More About Kenny Blaq - The Talented Comedian

Apart from that, there have been reports of Moyo Lawal suffering from severe depression. That was after she posted a photo of herself in tears, saying that her mind was asking her to die. Many fans assumed that Moyo Lawal was suicidal and even attempted to kill herself. But soon enough she returned with a new post, saying that she had some depressing thoughts, but she would never attempt to kill herself because she has a great life and incredibly supportive family.

Moyo Lawal may appear bold and confident but many think she really has a low self-esteem which she tries to cover up with daring photos and interviews, or maybe she’s just trying to draw more attention.