Chairman of Ohanaeze Ndigbo, has threatened to sue Nigerian Army, over killings of Igbo youths during the September 2017 “Operation Python Dance II” in the five states of the South-East zone.

The President of the organization, Chief Nnia Nwodo made open the threat at Enugu Sports Club, during the monthly lecture series of the Centre for Memories, tagged“Nkata UmuIbe”. 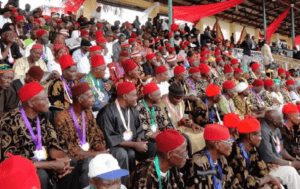 Nwodo revealed that local and international reports, after its investigation reported that over 150 youths were murdered extra-judicially by Nigerian soldiers.

He noted that Ohanaeze Ndigbo had on two occasions demanded that the military investigates and prosecutes soldiers that carried out the September 2017 operation in the zone, insisting that it violated the international rules of military engagement.

He said the organization thought the Nigerian Army would have taken action after their two meetings, adding: “After that military operation, Ohanaeze went to the leadership of Nigerian military and showed the army the international rules of military engagement document which that operation violated.

They promised to investigate and court marshal those that were involved. They gave the assurances on two occasions, Ohanaeze reminded them and they kept promising that those involved would be court marshaled.

“But till date, nothing has been done and the officers and men of the military who carried out the heinous act are still going about their business. At the moment, Ohanaeze is considering a court action to get redress.”

On the incessant killings by Fulani herdsmen, he stated: “There is an ominous sign and darkening cloud that if not properly handled will herald a disastrous rain. Our armed forces have been expropriated and manipulated by an ethnoreligious group”.

Nwodo reiterated the determination of Ndigbo in supporting the call for the restructuring of Nigeria, adding that the economic and political committee set up by the group headed by former Central Bank of Nigeria (CBN) Governor, Prof Chukwuma Soludo had already developed a template which would form the Igbo position for restructuring.

The Chairman lamented that some youths from South East saw him as a saboteur just because of his support for restructuring as against their call for self-determination, stressing that both are speaking of the same idea.

Recall that the Nigerian army had last year carried out a military operation code named: “Egwu Eke (Operation Python Dance 2)” to clamp down on the activities of the Indigenous People of Biafra (IPOB), which it described as a threat to the peace and unity of the country.

At the heat of the operation, members of IPOB were allegedly killed and images of soldiers maltreating young men and women from the zone went viral on social media which led to the condemnation of the attack by many bodies including South-East governors that called on President Muhammadu Buhari to call off the operation.